Driving is no time for text, emails and social media 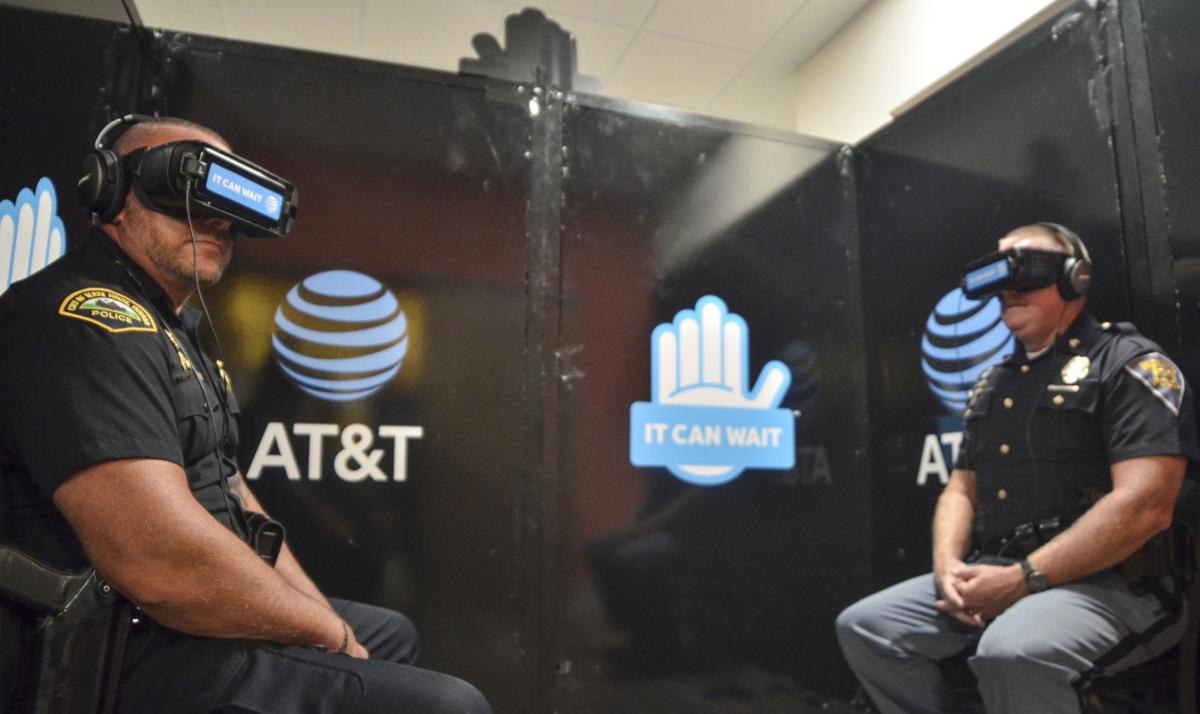 Tribune-Star/Austen Leake See for yourself: While first responders like Terre Haute Chief of Police John Plasse and Indiana State Police Sgt. Joe Watts (right) know the dangers of distracted driving, they tried out the reality demonstration that AT&T provided during Friday’s presentation at Launch Terre Huate.

AT&T and Launch Terre Haute hosted a virtual reality experience on Friday that demonstrated the dangers of distracted driving.

With the “It Can Wait” campaign, AT&T travels the country with visual reminders of the carnage distracted driving has inflicted on America’s roads.

The display features a wall that looks like a broken car windshield with many of the “shards” containing names of people killed by distracted driving and a wall of car keys that symbolizes the same.

Behind those walls, representatives from AT&T strapped folks into a pair of virtual reality headsets that gave them a first-person look at how dangerous texting and driving is.

In the VR experience, folks are asked to look at a virtual phone when it chimes with a text alert. After doing so, the video shows users that in the brief time they took to look away, their car traveled the equivalent of a football field without them so much as glancing ahead.

It also exposed users to a handful of testimonials from people who have been affected or affected others by distracted driving.

AT&T Indiana President Bill Soards said distracted driving has grown into a public health concern, with people doing everything from texting and talking on phones to updating their social media and taking pictures with both hands off the wheel.

“Nearly 9 in 10 people admit to using their smartphone while driving,” Soards said. “Yet, nearly a quarter of people don’t identify smart phone use as being a problem.

“And that is a major problem.”

Sgt. Joe Watts of the Indiana State Police echoed Soards’ sentiment, saying first responders throughout the Wabash Valley are called to gruesome scenes time and again because of distracted driving.

“Indiana State Police, along with a number of area law enforcement agencies, are on the front lines of this and are constantly at scenes pulling these people from their cars severely injured or dead at times,” Watts said.

“And on more than one occasion, we have taken a cell phone, an iPad or some other electronic device from the hands of these people who are dead with something playing on it or a text is going from it as we are taking it from their hands.”

According to the National Highway Traffic Safety Administration, 3,450 people died in 2016 as a result of distracted driving. That’s roughly nine people every day in the U.S.

Soards said AT&T is taking steps to reduce distracted driving and touted its free mobile app, DriveMode, as a way to do just that.

When enabled, DriveMode silences all incoming alerts, restricts incoming text messages and sends all phone calls directly to voicemail. It also sends return messages that says the person you are trying to reach is driving.